Trump ordered strike that killed Iranian Gen. Qassim Soleimani: Anybody else wants some? 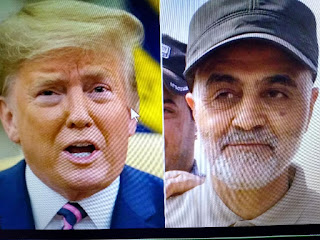 Somebody was going to catch it and Gen. Qassim Soleimani got himself got!
Anybody else wants some?

NY Post reports the head of Iran’s elite Quds Force was killed in a US rocket strike at Baghdad Airport on Thursday evening in a military action that’s expected to draw swift retaliation from Iran, the Pentagon said.

Gen. Qassim Soleimani perished in a rocket attack, the Defense Department confirmed in a statement, referring to him as the leader of a terrorist organization.

“At the direction of the President, the U.S. military has taken decisive defensive action to protect U.S. personnel abroad by killing Qasem Soleimani, the head of the Iranian Revolutionary Guard Corps-Quds Force, a U.S.-designated Foreign Terrorist Organization,” the Pentagon said in a statement