Rose McGowan slammed after walking back her apology to Iran 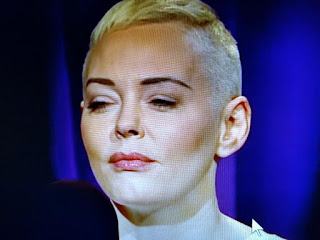 There have been quite a number of really stupid celebrities that come down the pike.
Rose McGowan is the most stupid of them all.


Fox News reports Rose McGowan is being lambasted for walking back a public apology she made to Iran in early tweets on Friday, reacting to President Trump's order of the airstrike that killed Iran's top general, Qassem Soleimani, that left many folks believing she was out of her gourd.

The former “Charmed” actress, 46, told the country of Iran in a tweet that the United States had “disrespected” the embattled nation and writing, Iran “Please do not kill us.”

"Dear #Iran, The USA has disrespected your country, your flag, your people. 52% of us humbly apologize. We want peace with your nation. We are being held hostage by a terrorist regime. We do not know how to escape. Please do not kill us. #Soleimani," she tweeted at around 1 a.m. on Friday