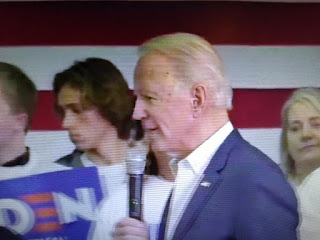 Joe Biden is so beyond help.  It's an embarrassing thing to watch.

NY Post reports gaffe-prone former veep Joe Biden put his foot in it again on Monday — claiming to have worked on the 2016 Paris Climate Accord with a Chinese leader who died 19 years earlier.

During a campaign stop in South Carolina ahead of the state’s primary on Saturday, Biden told a crowd his experience on the world stage as vice president under Barack Obama made him the right person to defeat President Trump.

“One of the things I’m proudest of is getting passed, getting moved, getting in control of the Paris Climate Accord,” Biden told the crowd in a video circulating on Twitter.

“I’m the guy who came back after meeting with Deng Xiaoping and making the case that I believe China will join if we put pressure on them. We got almost 200 nations to join,” he said.

Joe Biden claimed tonight that he worked with Chinese leader Deng Xiaoping on the Paris Climate Accord.

Except the current Chinese President is Xi Jinping.

Deng Xiapoing left office in 1992 and has been dead for 23 years. pic.twitter.com/ddEAmPhkZi
— Zach Parkinson (@AZachParkinson) February 25, 2020