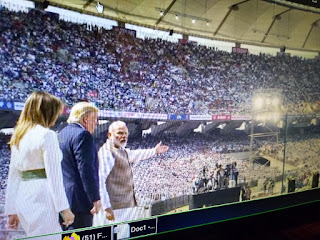 Trump met with over 110,000 at a massive rally in India.
What Democrat can do that?

Fox News reports President Trump and first lady Melania visited the Taj Mahal Monday, hours after the U.S. leader gave a rousing speech to more than 110,000 at a cricket stadium in Ahmedabad, India.

The president and first lady strolled around the grounds of India's most famous attraction, taking in the sights. It was a rare occasion of the president visiting a cultural site on an international visit.

Trump, who once owned the Trump Taj Mahal hotel and casino in Atlantic City, N.J. which was inspired by the Indian landmark, had never visited the Indian site until now. The president’s daughter Ivanka Trump and her husband Jared Kushner were also on hand, taking photos in front of the building.