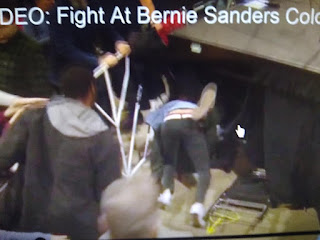 It looks like Bernie Sanders supporters can be easily triggered.
Funny how the white guy calls the black guy a racist.  Leftists are programed to say the same thing no matter what.   That's a very bad sign for the caliber of folks who support a lunatic socialist like Bernie Sanders.

NY Post reports a brawl broke out at a Bernie Sanders rally in Colorado on Sunday when a supporter of the Vermont senator confronted another man for wearing a T-shirt that read “Black Guns Matter,” a report said.

The man sporting the shirt, who is black, told CBS Denver that he was recording the presidential hopeful at the Colorado Convention Center when another rally attendee called him “racist” because of his shirt.

“He had a problem with the shirt I was wearing,” the man, who was not identified, told the news station.