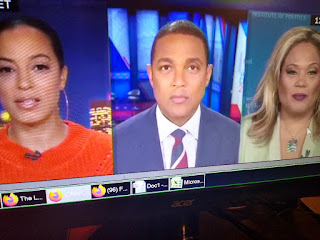 There it is!  The old standby the Democrat party has used against black folks for years.
One cannot be authentically black unless they vote Democrat.  Well, Sista!  That ship has sailed and African Americans are tired of getting hoodwinked by Democrats.

Not only did she completely downplay what the president has done for the black community, giving Obama credit instead, she also bullied black people who may be thinking of voting for Trump in the upcoming election.

Lemon asked Rye to comment on Trump campaign adviser Katrina Pierson calling this outreach program, “woke.” Rye sneered at the campaign using this term, saying she was “asleep,” before bashing President Trump for not doing anything for the black community. She even claimed the unemployment numbers were a result of President Obama’s work:

Email ThisBlogThis!Share to TwitterShare to FacebookShare to Pinterest
Labels: pol