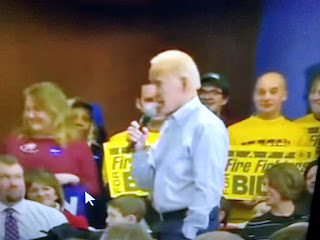 What?  Looking at the video I didn’t see much of a reaction to his comment.
So I don't know what happened before.  But, it really does sound like a wired thing Biden would say.

The woman had just asked the presidential hopeful about his fourth-place standing in the Iowa caucuses.

“How do you explain the performance in Iowa and why should voters believe that you can win the national election?” she asked, according to a clip of the exchange

Biden, 77, admitted it was a legitimate question but then asked her: “Iowa’s a caucus. Have you ever been to a caucus?”

When she indicated she had, Biden responded: “No, you haven’t. You’re a lying dog-faced pony soldier,” drawing laughter from the crowd.