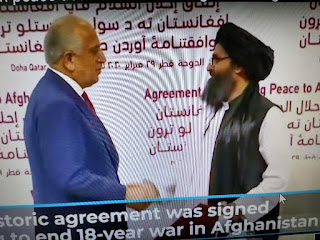 This was a war that became more about politics, than the war itself.
Enough is enough and we need to bring our troops home.

AOL News reports the United States signed a peace agreement with Taliban militants on Saturday aimed at bringing an end to 18 years of bloodshed in Afghanistan and allowing U.S. troops to return home from America's longest war.

Under the agreement, the U.S. would draw its forces down to 8,600 from 13,000 in the next 3-4 months, with the remaining U.S. forces withdrawing in 14 months. The complete pullout, however, would depend on the Taliban meeting their commitments to prevent terrorism.