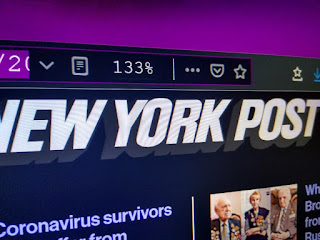 So this is par for the course,
All I want is the truth.  But, that's not what's coming from the New York Post.

The person who died in this story most likely had other medical conditions the NY Post doesn't confirm.  Nonetheless, the story list him as the second person who has died of coronavirus in New York.

But, after reading the article this information is not confirmed by the Post and what we're left with is speculation masquerading as facts.   This is journalistic dishonesty.

A 65-year-old Rockland County man is the second coronavirus fatality in New York state, The Post has learned.

The victim died earlier this week in the Village of Suffern and has posthumously tested positive for the deadly virus, sources said.

The Rockland County Medical Examiner’s Office had issued a press release about the patient Thursday, noting then no official determination had been made on his cause of death.

“We know that there are rumors linking this death to Coronavirus (COVID-19) but no testing has yet been performed,” the ME’s office said in the release.

“Please be assured that we will be testing for influenza and other common respiratory illnesses as well as COVID-19. When an official determination has been made, we will issue an update.”

The ME’s office did not immediately respond to a request for comment.

The second victim suffered “other significant health problems which likely contributed” to his death, a source told The Post.

Can't I get some truth here?