Trump gets Nasty with CBS's Paula Reid, says Liberal Media want Economy to Fail so he can lose Election 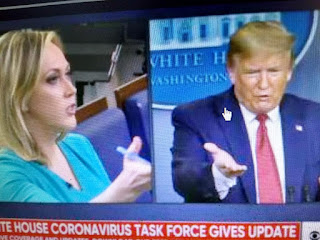 No doubt!  From the beginning the mainstream media say this pandemic as their last hope of getting rid of Trump.
The Mueller Report and impeachment both failed respectively.  However, Trump's leadership in this time of crisis is coming through.  Ask Andrea Mitchell.

NewsBusters reports having been a few days since there was even a noteworthy exchange between President Trump and a White House reporter, Wednesday’s Coronavirus Task Force daily briefing came through.

This time, CBS White House correspondent Paula Reid was on the receiving end as the President called her reporting “fake news” and doubled down on a tweet insisting the liberal media want the economy to tank (due to the coronavirus) in order to further harm his reelection prospects.