'You're A Terrible Reporter': Trump gets nasty with sensationalistic NBC's Peter Alexander during coronavirus briefing 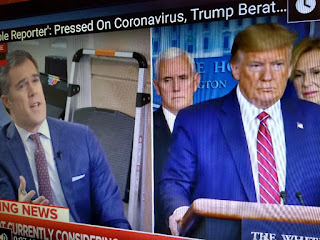 First of all Peter Alexander is a jerk who works for one of the worst news organizations in the world, NBC.
This is the same organization who employs Al Sharpton and Brian Williams.  That alone says everything one needs to know about NBC and how much they are a disputable news outlet.  Kudos for Trump not backing down to his BS!

Many other reporters in the room in turn sided with Alexander, making a large portion of the question-and-answer session more about their frayed relationship with the president than the pandemic.

The spat started when Alexander asked Trump if his “impulse to put a positive spin on things” could be giving Americans a “false sense of hope” amid the pandemic. The president explained he had a “good feeling” about possible solutions the FDA is working on.