Peter Alexander is a sub-par reporter working NBC, the worst news outlet in the mainstream media 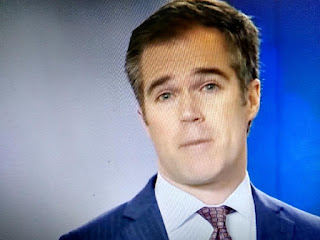 NBC still employs Al Sharpton, a tax cheat and race hustler who started his career on the Tawana Brawley hoax.

Brian Williams, a congenital liar who once reported dead bodies floating outside his hotel room in New Orleans during Hurricane Katrina.  It never happened.

Rachel Maddow, a conspiracy theorist who wouldn't know the truth if it sat on her crotch.

Andrea Mitchell,  who edited a video of Mitt Romney out of context and presented it as a fraud on the American people.  She has the to interview Peter Alexander?  She's a fraudster too!

And there's Peter Alexander, a Jim Acosta wannabe, who loves the spotlight and yearns to destroy President Trump.  There's nothing admirable about NBC.  They don't report news.  They're just another propaganda machine for the Democrat party and the majority of the American people know it!

Don't waste your time watching NBC News.  They are a disreputable bunch of people dedicated to mislead you.  The same can be said about ABC, CBS, MSNBC and especially CNN.  There are other professional news outlets like Fox News, The Washington Times, Gateway Pundit, The Free Beacon, Sky News, CNS News, NewsMax, ,One American News, NewsBusters, The Epoch, Breitbart, and InFo Wars.  Pay no attention to the mainstream media.
at 3/21/2020 01:37:00 PM