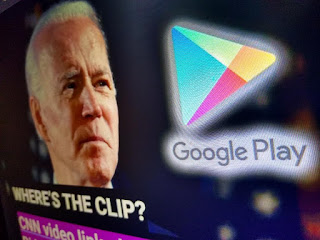 I'm in a funny position when it comes to this story.  As far as #MeToo allegations go
, it is the default position of this blog not to believe in the accuser until due process is served.  Or in other words, innocent until proven guilty.  Look, Joe Biden is a weak candidate and he's not going to beat Donald Trump.  However, the way his accuser is being treated by the mainstream media is outrageous!  Crickets!   They just don’t care even though there's much more credible evidence that something did occur.


Fox News reports the 1993 episode of CNN's "Larry King Live" featuring an anonymous caller who was later identified as the mother of Biden accuser Tara Reade was no longer listed in Google Play's catalog late Saturday.

Fox News later verified the Aug. 11 episode is not listed on the streaming service. It is unclear when it was removed from the catalog.