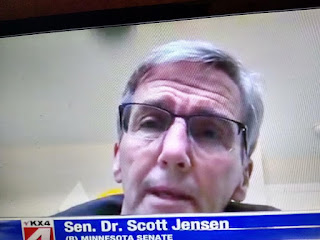 
This is the kind of scandal that is hiding in plain sight of the American people.  For the past few weeks we have under gone 24/7 hype-mania-panic of death, death, and more death.  We were told of 2.2 million Americans would die if we did not cower in our homes. These figures quickly changed in the next 24 HRS to lower numbers ever since.  But, what was really happening?  We're being sold an ingenious bill of goods.

Gateway Pundit reports Dr. Scott Jensen, a Minnesota physician and Republican state senator said he received a 7-page document coaching him to fill out death certificates with a COVID-19 diagnosis without a lab test to confirm the patient actually had the virus.

"Last Friday I received a 7-page document that told me if I had an 86-year-old patient that had pneumonia but was never tested for COVID-19 but some time after she came down with pneumonia we learned that she had been exposed to her son who had no symptoms but later on was identified with COVID-19, then it would be appropriate to diagnose on the death certificate COVID-19,” Dr. Scott Jensen said.

Dr. Jensen explained that this is not a normal procedure.

SHOCKING: MN Sen & Dr. @drscottjensen said that he received a 7 pg doc from @mnhealth to fill out death certificates with a diagnosis of #COVID-19 whether the person actually died from COVID-19 or not.