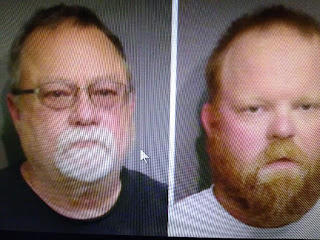 There's a lot wrong with this situation. If this happened back in February, why weren't these men charged then?
Who took the video and why was it recently released?  Or maybe it was released back in February and police had it all along?  The video points towards enough evidence to warrant an indictment for murder.  But, none of that happened.
Why?

NY Post reports the two men accused of fatally shotgunning unarmed jogger Ahmaud Arbery told police they believed he was a suspect in a recent string of break-ins — but no such crimes were reported to cops in the weeks leading up to the fatal shooting.

Glynn County Police Lt. Cheri Bashlor told CNN there was only one local automobile burglary reported on Jan. 1, when someone had stolen a firearm from an unlocked truck outside the McMichaels’ home back on Jan 1.

Gregory McMichael, 64, and his 34-year-old son, Travis, were arrested Thursday and face charges for murder and aggravated assault after the death of Arbery was caught on camera, horrifying Americans across the country.