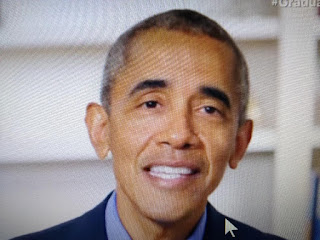 There's an unwritten rule that former presidents stay silent on commenting about current presidents.  However, former Democrat presidents always seem to break it.  It would've been fine if Obama gave an encouraging and thoughtful message to graduates, but the opportunity to take pot shots at President Trump was too much for him.  By the way, he gave this message to graduates of HBC's, historically Black Colleges. President  Trump has given more money toHBCs than any past president, including Obama.  But, O didn't mention that.

AOL News via Fake New NBC reports former President Barack Obama criticized “the folks in charge” for their response to the coronavirus pandemic in a commencement address Saturday, offering some of his most pointed condemnation of President Donald Trump’s administration.

“More than anything, this pandemic has fully, finally torn back the curtain on the idea that so many of the folks in charge know what they’re doing,” Obama said in the address, which was streamed online. “A lot of them aren’t even pretending to be in charge.”

“If the world’s going to get better, it’s going to be up to you," he said.

The commencement address was delivered to 27,000 students at 78 historically black colleges and universities in a two-hour event called “Show Me Your Walk H.B.C.U. Edition.”