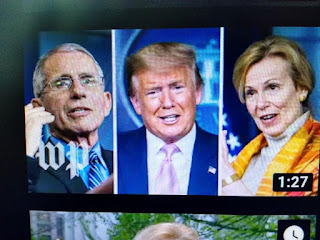 The sad part about this story is that Dr. Fauci and Dr. Brix won't pay a price for giving Trump bad advice.
They caused 32 million Americans to lose their jobs!

The Duran reports as reported weeks ago — in mid April Dr. Fauci admitted that it was he and Dr. Birx who persuaded President Trump to lock down the US economy knowing the massive destruction this would cause in jobs, lives and commerce.

President Trump: The big projection being that 2.2 million people would die if we did nothing. That was another decision we made, close it up. That was a big decision that we made. Two very smart people walked into my office and said listen these are your alternatives. And that was a projection of 1.5 to 2.2 million people would die if we didn’t close it up. That’s a lot of people.