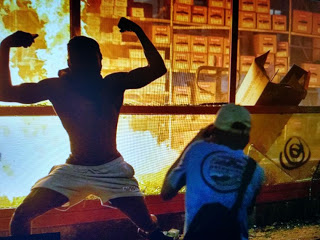 Everybody in the city Minneapolis is wrong!

Rioters are wrong for destroying their city.  But, the Democrats who run that city are wrong too for not arresting the officers involved in George Floyd’s case.
His death is a state matter!  There's no need to wait for the Feds.  So the process of justice should have moved forward with arrests, arraignments, grand jury, indictments, and setting a court date.  As slow as that process is, the first step should have been arrests.

Nonetheless, it didn't happen because Democrats who run the joint want to see fires, gun shots, havoc and mayhem the same way the mayor of Baltimore held back police during the Freddy Gray riots to let the mob have their space!

And it's all about politics!