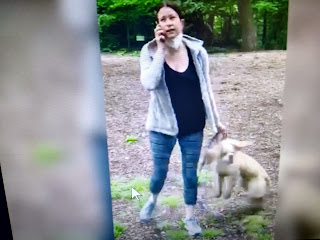 My opinion?  Both sides of this story should have minded their own business.
The so-called bird watcher should have found a park ranger and let them enforce any regulations.  The white woman, Amy Cooper, should have ignored the birdwatcher and kept it moving.  There was no need for a confrontation or filing a false report about what didn't happen.

As far as the racism?  I'm so sick and tired of the same template the mainstream media plays over and over again.  The fault is on us, the public, who keep on falling for the same hustle, the same manipulation time and time again.  It's like life isn't complete without some people getting offended the same tired way.

Sorry, but I'm done with that! Take it someplace else!

NY Post reports the New York City Commission on Human Rights has announced that it is launching an investigation into the case of the white dog-walker who called the cops on a black man in Central Park.

“At a time when the devastating impacts of racism in Black communities have been made so painfully clear—from racial disparities in COVID-19 outcomes, to harassment of essential workers on the frontlines—it is appalling to see these types of ugly threats directed at one New Yorker by another,” said Sapna Raj, deputy commissioner of the Law Enforcement Bureau at the Commission on Human Rights.

“Efforts to intimidate Black people by threatening to call law enforcement draw on a long, violent and painful history, and they are unacceptable. We encourage Ms. Cooper to cooperate with the Commission and meaningfully engage in a process to address the harm that she has caused,” Raj added in a statement.