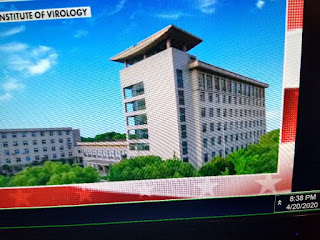 Only CCP talking points that are repeated by the mainstream media, NY Times and Washington Post that aims to deflect responsibility away from China.
However, the facts are overwhelming this pandemic began in a lab in Wuhan China.  Since then China and WHO covered it up with lies, deceit, murder and mayhem of the Chinese people.


Fox News reports a research dossier compiled by the so-called "Five Eyes" intelligence alliance states that China intentionally hid or destroyed evidence of the coronavirus outbreak, leading to the loss of tens of thousands of lives around the world

The 15-page document from the intelligence agencies of the U.S., Canada, the U.K., Australia and New Zealand, was obtained by Australia's Saturday Telegraph newspaper and states that China's secrecy amounted to an “assault on international transparency."

The dossier touches on themes that have been discussed in media reports about the outbreak of the virus, including an initial denial by China that the virus could be transmitted between humans, the silencing or "disappearing" of doctors who tried to speak up, the destruction of evidence in laboratories and refusal to provide live samples to international scientists working on a vaccine.