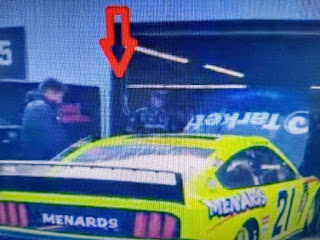 I never heard of Bubba Wallace before.  But, he's a disgrace!
What a liar!  He's the Jussie Smollett of NASCAR!


Total Sports reports NASCAR revealed on Sunday evening that a noose was found at the track-side stand used by Bubba Wallace, who is the only Black driver in the entire sport. An investigation has been launched into the noose, found in the garage stall on the circuit, Talladega in Alabama, said the organization.

In a statement, NASCAR said he was “angry and outraged” about the noose, and that there was “no place for racism in NASCAR”.
“We have launched an immediate investigation, and do everything we can to identify the responsible person(s) and eliminate them from the sport,” the association added.
As soon as a noose was mentioned, many began to think this was yet another situation just like with actor Jussie Smollett who has been accused of faking his own hate crime that was a complete with a nose being put around his neck.
One NASCAR fan took it a step further and actually provided evidence that he says not only proved it wasn’t a noose, it was something commonly used in garages at events.


1) Yes. We finally have a picture of the Bubba Wallace garage door, and lookie here. Notice how much shorter the pull rope is (compared to adjacent) once you cut off the "noose" (hand loop).

And it's in Bay #4. Exactly where the loop pull was.