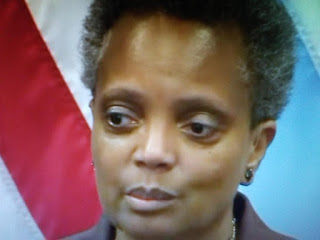 I've been making this point throughout the Barack Obama presidency and somewhat during Trump. Chicago literally has a Newton Connecticut gun massacre every weekend.
Sometimes the shootings are no less than 11 or has high as 23.  This is the largest I've seen.  Chicago is a city that is run lock, stock, and barrel by Democrats and this is normal for them and they continually vote these assholes back in.  The new mayor Lori Lightfoot, an openly Gay politician hasn't stopped a thing.  This carnage continues.

Chicago SunTimes reports Chicago saw its highest number of gun violence victims in a single weekend this year with 104 people shot across the city from Friday evening to Monday morning, 14 of them fatally. Five of those killed were minors.

The weekend saw more shooting victims but less fatalities than the last weekend of May, when 85 people were shot, 24 of them fatally — Chicago’s most deadly weekend in years.

The latest child fatality happened early Monday in Austin on the West Side.
Two boys, 15 and 16, were walking in an alley at 12:18 a.m. in the 4700 block of West Superior Street when someone fired at them, possibly from a gray sedan, according to Chicago police. The 15-year-old was shot in his leg, chest and abdomen. He was taken to Stroger Hospital and pronounced dead. The other boy, 16, was hit in the ankle and also taken to Stroger. He was in fair condition.

By the way, New York is rapidly catching up to Chicago after the disbanding of  NYPD anti-crime units.  One of the most stupidest decision ever made in NYC!