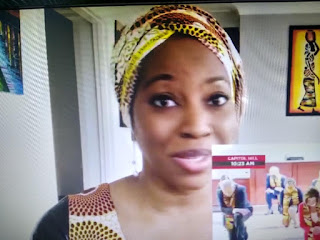 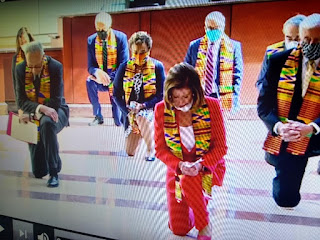 This incident is a goldmine for Republicans with some backbone to be used in ads this Fall.
Democrats don't realize how much they stepped in it.

AOL News reports congressional Democrats wore a traditional African cloth to announce sweeping legislation on Monday that aims to increase the accountability of police officers.
The Democrats wore Kente cloth stoles handed out by the Congressional Black Caucus and knelt on the floor of the U.S. Capitol Visitors Center for eight minutes and 46 seconds — the time police officer Derek Chauvin's knee was on the neck of George Floyd — before a press conference announcing the proposed "Justice in Policing Act."
Rep. Karen Bass, the chairwoman of the Congressional Black Caucus, defended the clothing choice to MSNBC when pressed about it.
"The significance of the Kente cloth is our African heritage, and for those of you without that heritage who are acting in solidarity," Bass said at the news conference.
"That is the significance of the Kente cloth. Our origins and respecting our past."
Their clothing choice was derided on social media by some, with one author, Obianuju Ekeocha, posting a video saying the move was "virtue signaling."


I had to say something about the American politicians shameless and ignorantly using the Kente fabric as a prop in their virtue signaling.