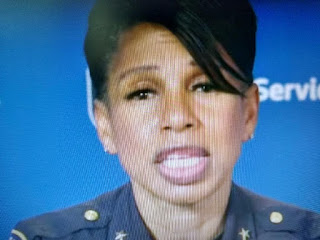 This is very interesting. Here's an African American female as the police chief.
I'm sure she's very competent at her job and she's defending her police force.  Has any of these signs of progress mattered with liberals?  Nope!  Not a damn bit. What's happening in Seattle with this Chaz is illegal.  Lets' start there before any conversation.  This police chief want to enforce the law.  The mayor doesn't!  Both took oaths, but the mayor is refusing to follow her oath to the people of Seattle.

NY Post reports Seattle protesters continued their fourth day occupying the blocks around an abandoned police precinct Friday, as the city’s top cop said she wants back inside “as soon as possible.”
“Ideally, we just need to get back into the building,” Seattle Police Chief Carmen Best told local station KIRO-7.
“People are looking for a plan, but we want to make sure we modulate anything that we’re doing,” Best told the station.
“We don’t want to exacerbate or intensify or incite problems that are going to lead to harm to the officers or the people who are standing by,” she added.