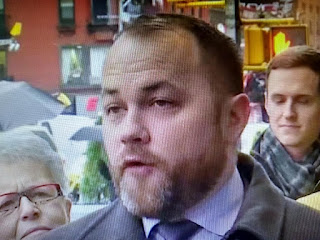 From the mind of an immoral person like, Corey Johnson,  comes an equally immoral idea.
One of the first actions he took as council president was to wipe away New York City's quality of life laws.  Thanks to Johnson New York has become the largest public toilet in the country whereby people are allowed to defecate and urinate in the streets without penalty.  That's his mindset.  He wants to follow Bill de Blasio and become mayor.

“We believe that we can and should work to get to $1 billion in cuts to New York City’s police spending in the Fiscal 2021 budget, an unprecedented reduction that would not only limit the scope of the NYPD, but also show our commitment towards moving away from the failed policing policies of the past,” Johnson (D-Manhattan) announced late Friday.