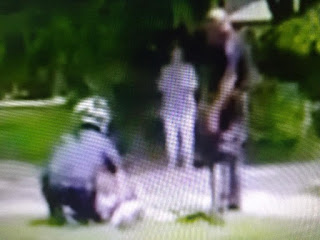 The below is a very misleading headline by the NY Post:

What?  How can this be?  How can a white police officer throw a black Amazon driver to the ground for parking the wrong way?  How can this happened with all the protests, the riots, all the crap we as a country been through the last week?
Well, that's not what happened in this case.  And shame on the New York Post for dishonest reporting, the kind of dishonesty one would find on CNN and MSNBC!
The bellow paragraph in this article of the NY Post appears at the bottom third of the story.  However, it's the key information that is needed to understand what happened in this case.  It's against the law in Michigan to refuse showing a police offer identification when asked for it.  So, the Amazon driver already violated the law. He was asked 11 times.  What is the police officer to do then?  Exactly what happened in this case!

“The driver became argumentative and refused multiple requests for his license. In fact, he refused 11 times,” Dwyer said, according to clickondetroit.com. “The officer took the driver the ground to gain control of him and the situation for everyone’s safety before it escalated further.”

NY Post reports a white Michigan police officer has been placed on paid administrative leave after being caught on video arresting a black Amazon driver who parked the wrong way while delivering a package, according to reports.

The Warren police officer is seen on Facebook Live video restraining the driver on the ground on Tuesday afternoon, Fox 2 Detroit reported.

“I delivered to her,” the unidentified deliveryman says.

“I can attest to it — he put the box in my hand,” Diana Gouim adds.

Jim Michaels, who ordered the package, told WXYZ that the cop was “aggressive” in taking the employee to the ground.


I cannot stress any harder that the New York Post is misreporting incidents invoving police officers.  They are adding to a bunch of propaganda that is misinforming millions and it needs to stop immediately!
at 6/11/2020 09:16:00 AM