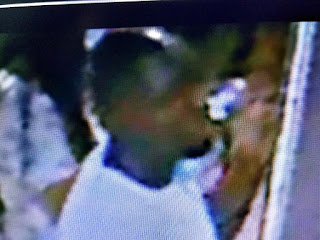 Home Boy picked the wrong person to slash.
Doing that to a famous actor's daughter, his ass is as good as caught.  But, even if they catch the guy, he'll be out in a few hours.  That's the legal system Gov. Andrew Cuomo set up for his criminal base.

NY Post reports the NYPD was still searching Saturday night for this man in connection with a brutal restaurant brawl that left “Frasier” star Kelsey Grammer’s actress daughter slashed in the arm and in need of stitches Friday night.
The image — showing a bald man in a white T-shirt and shorts — was released by the NYPD.
“On Friday, July 24, 2020 at approximately 2328 hours, in front of 60 2nd Ave, a 36-year-old female victim and a 32-year-old male attempted to break up a dispute between the unidentified male and other patrons at the location,” The Black Ant restaurant in the East Village, the police said in a press statement