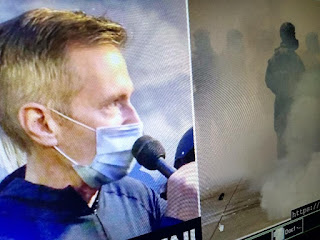 The other day President Trump mentioned in his interview with Chris Wallace that Fox News hasn't been the same since Roger Ailes died.

This is an example.

I read in their headline Feds tear gassed mayor.  They had since changed their headline.  But I was concerned they had the wrong information.  In the article itself, they used a NY Times account of what happened last night.

Fox News reports a riot was declared in Portland just after midnight Thursday morning after Mayor Ted Wheeler’s tense visit with protesters-- where he was booed, told to resign, given a list of demands and tear-gassed by federal agents.

His visit ended with his security detail engaging in a struggle with protesters late Wednesday night as they worked to get the mayor to safety, a report said.

Earlier, he moved with protesters to the fence outside of the federal courthouse where he stood at the front and was tear-gassed along with the crowd, according to New York Times correspondent Mike Baker.

Since when does Fox News rely on the NY Times for any information given the NYT is a woke-idiot rag sheet with an agenda?  The NYT is looking to push Feds making the situation worse in Portland and Fox News fell right along with the false narrative.  Shame on Fox!