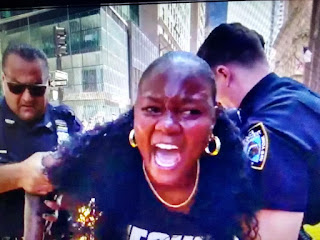 This unidentified black woman deserves her own statue!
She represents the majority thinking of the black community the mainstream media would never dare report.  Yeah, give her the keys to the city too!

NY Post reports the Black Lives Matter mural in front of Trump Tower on Fifth Avenue was vandalized Saturday for the third time this week — this time by a black woman yelling, “refund the police!”

In the 3 p.m. episode, black paint was tossed on the yellow BLM mural as two officers tried to stop the woman, who wore a “Jesus Matters” T-shirt, from smearing the paint over the pavement.
“They’re liars!” the woman shouted as she kept pulling her arms away from the two cops. “They say they care about black lives, they’re saying to defund the police.”