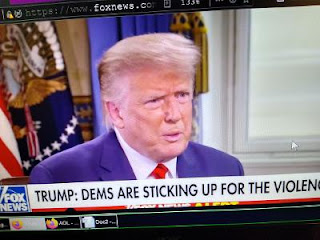 Weak!
That's the sad excuse for Joe Biden and his radical group of Democrats.  For four days the DNC said nothing about the havoc and mayhem going on in Democrat run states.  But, the polls are swinging Trump's way because Americans care about security.

Fox Newsreports President Trump told Fox News' Laura Ingraham in an exclusive interview Monday night that he believes demonstrations outside the White House on the final night of the Republican National Convention last week were bankrolled by "some very stupid rich people."

Trump added on "The Ingraham Angle" that an RNC attendee had traveled to Washington "on a plane from a certain city, and in the plane it was almost completely loaded with thugs wearing these dark uniforms, black uniforms with gear and this and that."

The president declined to say who had told him the story, but promised Ingraham he would reveal it "sometime."