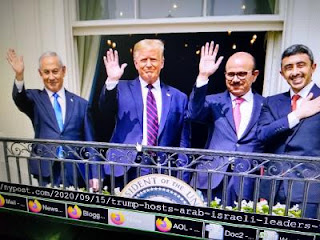 This out-of-the-box peace plan engineered by Trump has made the Palestinians irrelevant.

Who would have ever thought that was possible?

NY Postreports President Trump on Tuesday heralded “the dawn of a new Middle East” as he hosted regional leaders for the signing of the “Abraham Accords” normalizing relations between Israel and two Arab countries.

The foreign ministers of the United Arab Emirates and Bahrain joined Israeli Prime Minister Benjamin Netanyahu on the White House South Lawn to affirm their recent recognition of Israel’s statehood.