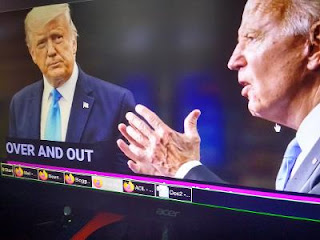 What is Biden trying to hide? Biden is sure to be drugged up to make sure he doesn't suffer from sun downing.

The Trump campaign claimed Biden's campaign had agreed to such an inspection before reversing themselves.

“Joe Biden’s handlers several days ago agreed to a pre-debate inspection for electronic earpieces but today abruptly reversed themselves and declined. Biden’s handlers have asked for multiple breaks during the debate, which President Trump doesn’t need, so we have rejected that request," said Trump campaign spokesman Tim Murtaugh. "On top of the refusal to take a drug test, it seems pretty obvious that the Biden team is looking for any safety net they can find in the hours leading up to the debate. With his 47 years as a failed Washington politician, how much help does Biden want?