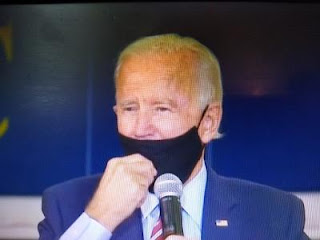 The real Joe Biden is a heavily corrupt politician that has made billions, with a B, since entering politics 50 years.

The information is out there.  But, because our press is as corrupt as he is, half the country is clueless.

Daily Mail reports Joe Biden has found himself being criticized for saying that he had the luxury of staying at home during the pandemic because 'some black woman was able to stack the grocery shelf'.

The Democratic presidential nominee made the comments last month, but the clip went viral on Monday after it was picked up by a pro-Trump group, and retweeted by Donald Trump Jr.

He was speaking to a group of veterans in Tampa, Florida, on September 15 and was asked about the pandemic.