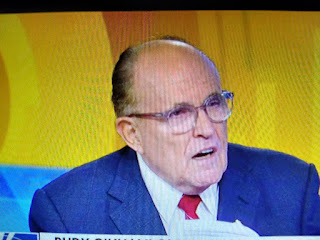 Thanks to the lies and unprofessionalism of the mainstream media, half of the American people are ignorant of the biggest political theft in U.S. history.

It's the same ignorance that got Joe Biden elected without him stating a position on issues.  That's not how democracy supposed to work.  That's Communism!

Newsmax reports Rudy Giuliani says he and his associates contesting election results on behalf of President Donald Trump will be lobbying state legislatures in key states to assert their authority in determining the electors for the Electoral College in addition to their legal challenges because they ''don’t have a lot of time.''

''We’re doing both, with equal speed and enthusiasm and taking advantage of which one gives us the hearing the quickest. And which one will work fastest for us,'' said Giuliani, the former mayor of New York City. ''Because we don’t have a lot of time. We’ve got a lot of evidence; we don’t have a lot of time. And we’re facing a major censorship, so it’s very hard to get this information out to the public.