Stealing election from Trump: Joe Biden wins Wisconsin thanks to bogus mail in ballots as Trump campaign calls for recount 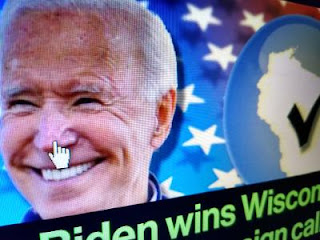 This is theft in broad daylight as Democrats cheat, lie and rob the presidency from Donald Trump!

NY Post reports with just a 20,000-vote margin and the Trump campaign demanding a recount, Wisconsin was called as a win for Joe Biden on Wednesday.

The unofficial triumph in America’s Dairyland delivers Biden another 10 electoral votes — with 270 needed to win the presidency — and steals a state that President Trump captured in 2016 and was holding out hope for this year.

The state was only called Wednesday afternoon, by both CNN and the Associated Press, with the outcome delayed in part due to tallying issues in Milwaukee County, which did not report until nearly 5 a.m.