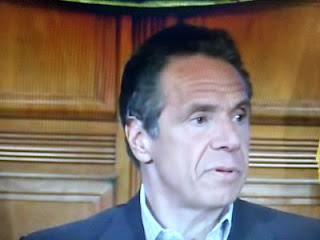 I've been saying for months that NY Gov. Andrew Cuomo is an asshole, is a Son-of -Bitch, is the most incompetent governor in New York history, and a miserable arrogant human bein!

I think this revelation illustrates what I've been saying.  He belongs in prison.  But, I doubt that's gonna happen because to this clown because leftist world props him up.  This is the same leftist world that is currently trying to impeach Donald Trump.

NY Post reports Governor Cuomo’s top aide privately apologized to Democratic lawmakers for withholding the state’s nursing-home death toll from COVID-19 — telling them “we froze” out of fear the true numbers would “be used against us” by federal prosecutors, The Post has learned.

The stunning admission of a cover-up was made by Secretary to the Governor Melissa DeRosa during a video conference call with state Democratic leaders in which she said the Cuomo administration had rebuffed a legislative request for the tally in August because “right around the same time, [then-President Donald Trump] turns this into a giant political football,” according to an audio recording of the two-hour-plus meeting.