Why is there barbed wire fencing around the Capital? Democrats ARE NOT afraid of White supremacists after all 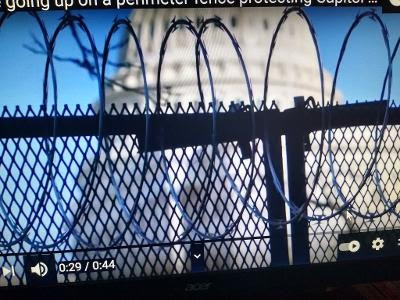 There have been several theories as to why barbed wire fencing still surround the Capital.  Here's my opinion.

Democrats are afraid of the people of this country for two reasons:

1. Democrats got away with stealing the election from Donald Trump.  There's no doubt about it.  There's mountains of evidence to prove it.  But, establishment Democrats and Republicans, the media, and unfortunately the courts were either in on the steal, or have been compromised by the Deep State to let the steal stand.  74 million Trump voters will believe this until their dying days.  It doesn't mattter what anybody says.

2. Democrats are afraid of their own supports because they refuse to pass Medicare for All.  Have we've heard anything about Medicare for All lately?  Absolutely not and it's the number one issues progressives want.  Sooner or later that voting black will get very restless and can force a scene at the Capital that woulds make January 6 look like a picnic.