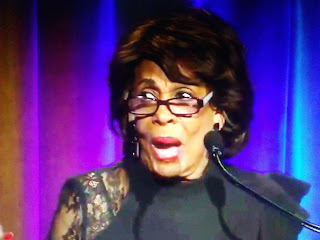 How long is this country going to endure this extremely stupid woman?

I mean give me a break!  Maxine Waters never ceases to show how utterly dumb she is.  She's irresponsible and I feel Waters encourages violence and riots by her words coming out of her mouth.  And of course her complexion is her protection.

AOL News reports just moments after the jury had exited the courtroom on Monday to begin deliberations in the trial of Derek Chauvin, the former police officer charged in the death of George Floyd, Chauvin’s defense attorney pushed for a mistrial over its coverage.

“Now that we have U.S. representatives threatening acts of violence in relation to the specifics of this specific case, it’s mind-boggling to me,” Eric Nelson, Chauvin’s attorney, said to the judge.

“Well, I’ll give you that Congresswoman Waters may have given you something on appeal that may result in this whole trial being overturned,” Judge Peter Cahill replied.