Why Lebron James is really not that bright of a person?: Deletes tweet targeting officer who shot Ma'Khia Bryant 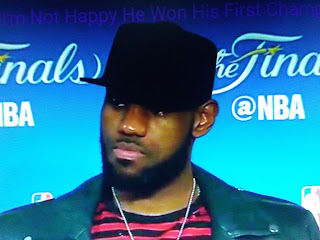 Let's face it, he's dumb.  He's been told all his life how great he is.  And it's true on the basketball court, no doubt.  But, when it comes to life outside the court, he needs to stay out of grown folks business. Just because he's a mega basketball talent doesn't give him the ability to analyze anything outside the court.  He don't have the intellect or the critical mind.  He thinks he does.  His entourage tells him he does. However, his tweet calling out the cop who shot and killed a knife-wielding teen girl, a totally justified shooting, shows that James doesn’t have the observation skills to make a valid judgment.

Stick to basketball, Son!  Stay in your lane.

AOL News reports LeBron James has deleted a tweet he posted Tuesday night in reaction to the shooting of Ma'Khia Bryant.

The tweet in question featured a picture of Columbus police officer Nicholas Reardon, who shot the 16-year-old Bryant while responding to a 911 call on Tuesday. The tweet read "YOU'RE NEXT #ACCOUNTABILITY" and included an hourglass emoji.