What's the point for New Yorkers to vote Eric Adams mayor when he's no different than Bill dde Blasio? 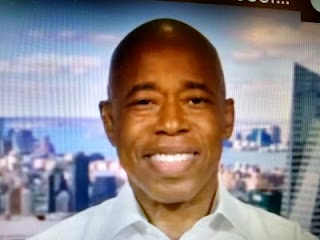 It seems the die is cast for the eventual election of Eric Adams to become the next mayor of New York City.

He's got plenty of money in the bank to run and crush GOP nominee Curtis Sliwa into a mound of dust.

My question to my fellow New Yorkers: Why is that the case?  Look around this city and see what progressive policies have done to our town.  Do people really think  Adams is a departure from all that?

Don't let his past resume fool you as being a former police captain.  He's another empty suit, with a black face, that offers nothing different from the De Blasio administration.

Look around you and ask how did we get here?  And the next question should be how do we stop this?

My opinion, Adams doesn't stop a damn thing!  New York will continue to follow the same progressive policies that has given us high crime, an increase of homelessness, businesses destroyed.  And don't even open your mouth and say, Covid, because New York was on this track the day Bill de Blasio took his oath as mayor way before anyone ever heard of Covid.

It's time for New Yorkers to give a damn and pay attention.  Don't vote for Eric Adams because there's a "D" behind d his name.  Stop being a robot and ask how did we get here? Do you really think Eric Adams is the solution?