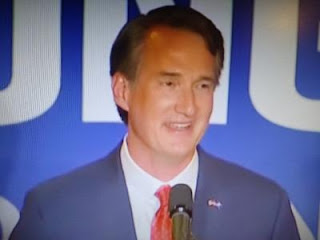 The good people of Virginia rolled up their fists and gave a punch to wokism, progressivism, and Sleepy Joe Bidenisam!  The education of children was a huge factor and the evils of Critical Race Theory was exposed for all to see.

Fox Newsreports the Fox News Decision Desk can now project that Republican Glenn Youngkin will win the gubernatorial race in Virginia, defeating former Democratic Gov. Terry McAuliffe in a statewide election with national implications that McAuliffe was once expected to win.

"Alrighty Virginia, we won this thing," Youngkin told supporters in his victory speech a little after 1 AM Wednesday.

And he vowed that "together, we will change the trajectory of this commonwealth