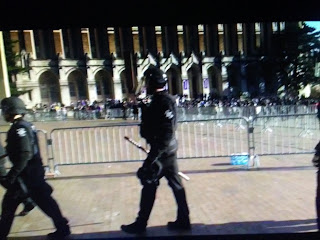 College Republicans in Washington state have it rough because their surrounded by Leftists.
That's what the West Coast unfortunately has become, a Liberal loony bin.

Fox News reports ive people were arrested as fights broke out and at least one American flag was burned Saturday after a college Republican rally in Seattle drew counter-protesters.

College Republicans at the University of Washington had invited members of Patriot Prayer, a group in Vancouver, Wash., to speak in the university's Red Square for a "freedom rally," the Seattle Times reported.

The goals were to bring conservatives together and promote free-speech rights, College Republicans President Chevy Swanson told the Times. As the event got underway, supporters chanted "U-S-A!, U-S-A!," and signs included one that read, "We died for liberty not socialism."