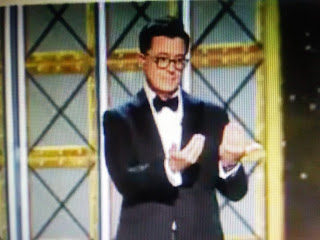 The Lib celeb set will never that they do not represent the feelings of the majority of the American people.
Not by a long shot!

Grabien  reports the 2017 Emmys certainly lived up to its billing as being the most politically charged ever.
Within seconds, host Stephen Colbert, singing an opening number themed around how seemingly out of control world events are, took a few soft jabs at President Trump. But then Julia-Louis Dreyfus quickly upped the ante, joining in and singing, “Imagine if your president wasn’t loved by Nazis.”
Once the monologue actually began, Colbert dedicated almost five minutes to mocking Trump.
The stage thus set, politics pervaded almost the entirety of the broadcast.
With virtually every presenter or award recipient working in at least one political reference, those who avoided politics were more notable than those who didn't.
There were so many political moments in this year's Emmys, we've compiled ...


The Top 10 Most Tedious Left-Wing Moments: