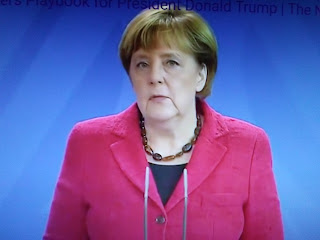 The woman is destroying the social fabric of Germany and she gets re=elected.
Go figure.


Yahoo News reports Chancellor Angela Merkel clinched a fourth term in Germany's election Sunday, but her victory was clouded by the entry into parliament of the hard-right AfD in the best showing for a nationalist force since World War II.

Merkel, who after 12 years in power held a double-digit lead for most of the campaign, scored around 33 percent of the vote with her conservative Christian Union (CDU/CSU) bloc, according to preliminary results. It was their worst score since 1949.