Solemn Trump in Vegas: ‘America truly a nation in mourning’ 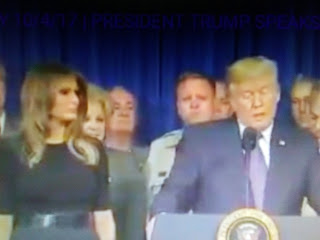 This was a tough duty for President Trump.  I still can't get over this attack.  Horrific!

Los Vegas Sun reports solemn in the face of tragedy, President Donald Trump visited hospital bedsides and a vital police base in stricken Las Vegas on Wednesday, offering prayers and condolences to the victims of Sunday night's shooting massacre, along with the nation's thanks to first responders and doctors who rushed to save lives.
"America is truly a nation in mourning," the president declared, days after a gunman on the 32nd floor of a hotel and casino opened fire on the crowd at an outdoor country music festival below. The rampage killed at least 58 people and injured more than 500, many from gunfire, others from chaotic efforts to escape.