Trump: Ask Kelly whether Obama called after his son was killed in action, He didn't! 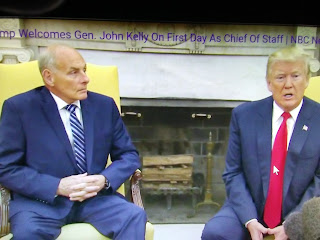 Barack Obama didn't care about the military and rarely called the families of fallen soldiers.
If they got a letter it was signed with an autopen.  This is nit refutable!


CNN reports President Donald Trump, in defense of his claim that President Barack Obama didn't call the loved ones of fallen soldiers, floated the idea Tuesday that reporters ask his chief of staff, retired Gen. John Kelly, whether Obama called him after his son died in Afghanistan.

The comment came during an interview on Fox News Radio.

"As far as other presidents, I don't know, you could ask Gen. Kelly, did he get a call from Obama? I don't know what Obama's policy was," Trump said.

Kelly's son Robert died when he stepped on a landmine in Afghanistan in 2010. Kelly, a retired four-star Marine general, was a lieutenant general at the time.

Multiple White House officials have told CNN that Obama did not call Kelly when his son was killed.