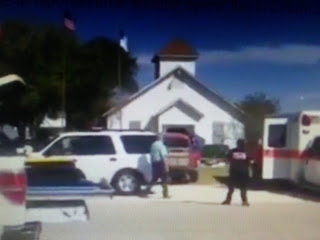 Oh my God!  I don’t know what else to say.
I go to church every Sunday and something like this is the last thing on my mind.  Why?

NY Post reports the Texas shooter responsible for killing at least 27 people Sunday has been identified as Devin Patrick Kelley.
Kelley, 26, was married and a resident of New Braunfels, a suburb of San Antonio, said the Daily Beast.

NY Post reports at least 27 people were killed and two dozen more injured when a gunman opened fire inside a crowded Texas church Sunday, according to reports.
The unidentified shooter walked into the First Baptist Church of Sutherland Springs just before noon and began firing, authorities said.
One of the shot victims is a 2-year-old child, the Dallas Morning News reported.
Wilson County Commissioner Albert Gamez, Jr. told CNN that first-responders informed him the death toll is at 27 — and expected to climb.