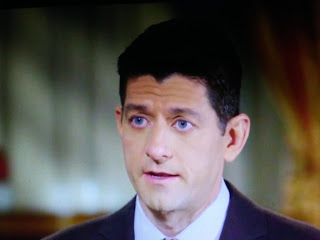 Paul Ryan finally pushes back politically against Corrupt Hillary taking over the DNC to rig the Democrat primary for herself.
He should've spoke up as soon as the story broke.  I guess late is better than never.

Fox News reports House Speaker Paul Ryan expressed outrage Sunday about recent revelations that Democrat Hillary Clinton’s 2016 presidential campaign cut a deal with the Democratic National Committee that effectively eliminated any potential primary challenger’s chances of winning the party nomination, saying, “this takes the cake.”
“We’ve all said the Clintons live above the law,” the Wisconsin Republican told “Fox News Sunday." “But this takes the cake.”
The Clinton campaign in 2015 reportedly made a deal with the DNC to give the cash-strapped group money -- including a purported $1.2 million down payment -- in exchange for being able to have input over such key decisions as hiring, spending and strategic research.