Ann Coulter's reaction to Trump's on-air live immigration meeting, is she Bipolar or was it that time of the month? 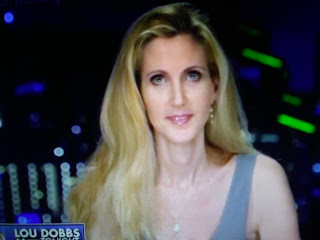 If somebody were to ask me would I share a foxhole with Ann Coulter?
My answer would be an emphatic, Hell No, because she has a nasty tendency of stabbing people in the back.

I just don't get this woman.  One moment she's brilliant and the next she's as scatterbrain as Madonna.  Case in point was her outlandish reaction to President Trump's live on TV immigration with members of Congress.  She called the meeting the lowest day in Trump's presidency.

At this point let me remind everyone that Coulter supported Chris Christie and Mitt Romney for president.  So her judgment is very shaking at times.  What meeting was she watching?  When did she begin working for the DNC?  I would expect that kind of stupid comment form Joy Reid.  But, Ann Coulter?  Maybe Michael Wolff should a book about her mental stability?

Every time Trump spoke about DECA, he also said we must have The Wall, end chain migration and the lottery.  But, somehow Am Coulter and other critics missed it.
at 1/10/2018 07:24:00 PM