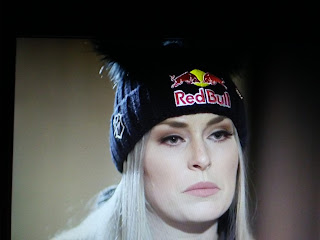 Vonn made headlines when she said prior to the Olympics in South Korea that she wasn't representing President Donald Trump.
Well, the idea is to win the gold medal, Lindsey!  Nobody gets excited about winning bronze.


NY Times reports the showdown between Lindsey Vonn and her heir apparent, Mikaela Shiffrin, has been a dominant subplot throughout the Pyeongchang Olympics, and it was in the air again on the final run of the last individual Alpine race of the 2018 Winter Games.

The moment was, in fact, a scene nearly a year in the making, one whose flash point came last March when Shiffrin, 22, ascended to the title of world’s best women’s skier — a designation the 33-year-old Vonn had passionately guarded as her own for many years.